A U.S. Marine Corps veteran was the star of Monday’s Laker game… when she filled her prosthetic leg in beer and chugged it on video!

The whole thing was displayed on the scoreboard during L.A.’s matchup against the Indiana Pacers … when Annika Hutsler took advantage of her very first NBA game in epic fashion.

The fans were clearly thrilled with the stunt… cheering her on while she drank her drink.

A woman just took off her prosthetic leg and drank a beer out of it at the Lakers game. Needless to say, she was named the fan of the game pic.twitter.com/rFskWi6sXb

The move resulted in Hutsler earning the title of “fan of the game” … which came with a $100 gift card.

Hutsler — who enlisted in the USMC in 2017 — decided to have her leg amputated in 2019 after several attempts to have a tumor removed from her foot … and has since transitioned to careers in acting, modeling and sports. 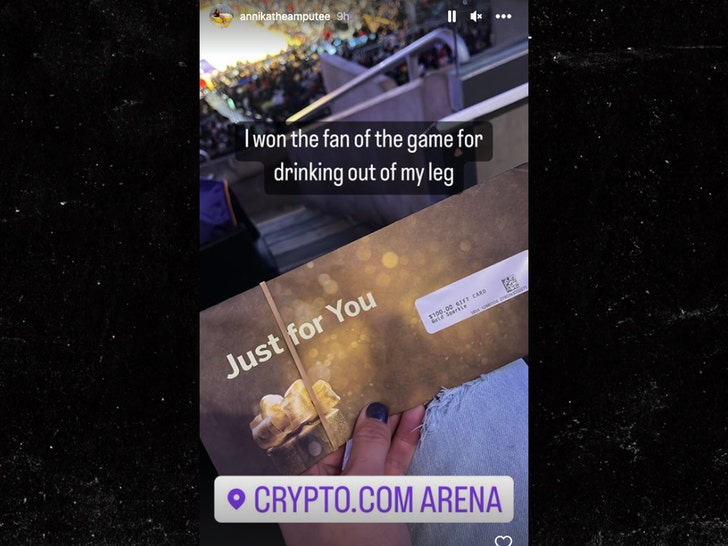 In fact, she won silver medals in the 100-meter and 200-meter wheelchair races at the U.S. Department of Defense Warrior Games.

As for the game, Hutsler — who jokingly admitted she was rooting against the Lakers — got to see a good contest … but ultimately, LeBron James and Co. blew a 17-point lead to lose to the Pacers, 116-115.